You know it, I know it, we all know it – as soon as a “Part II” is appended to the title of your favorite movie and it hits theaters as the summer’s next blockbuster, the results will be disastrous. A movie which simply isn’t as good as the original and may even sully your view of that original no matter how you enjoyed it the first time.

You’ll forever say, “Yeah, it was a good one, but the sequel(s) sucked.” The sequels, even if the only thing they had in common was the title and some of the characters, simply won’t measure up to the experience the first movie gave, and you won’t be able to divorce them from each other.

But in all, the sequels generally don’t measure up to the standards the original set, and leave us with a bad taste in our mouths.

What Matters to Us

First of all, to fully realize why stories resonate with us, we have to understand how we relate to protagonists or antagonists.

I give you – Maslow’s Hierarchy of Needs. 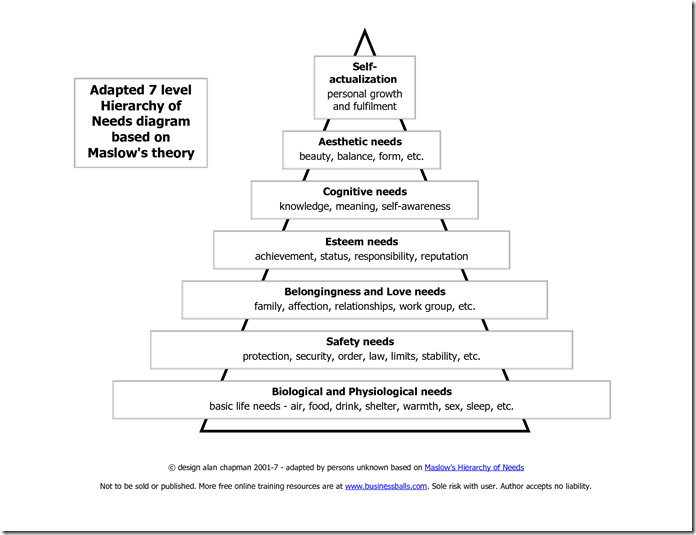 There are some pretty basic things we as humans need to happy, and as we achieve things along the lower levels of the hierarchy shown above, we get to shoot for the higher levels. How well we relate to characters in stories has to do with how well we can identify with the character’s movement up the hierarchy.

For example, we can all side with a protagonist who’s trying to survive. That’s pretty low-level. Staying alive is a pretty basic need, wouldn’t you say? And we can see pretty easily why movies where someone’s trying to win the affections of another fits well and is popular with the masses. That one sits right smack in the middle of the hierarchy.

There’s a lot more to Maslow’s theory than this simple drawing can portray, and I’m not an expert in psychology, so I won’t expound on it. But you can do the work yourself, if you’d like. Find your favorite movie(s), and track what the overall goal of the protagonist is against the diagram above (or one of your own choosing – the ‘Net’s full of ‘em). I’m confident what you’ll find is the person in the film or book you’re rooting for is shooting for one of the basic needs on this list. The lower the need, the more we can relate to the character, and the better the adoption into the heart of the audience.

In The Terminator, a terrible robot from the future has come to the (then-)present to kill an innocent, naïve young woman who’s not having a great day. She’s unlucky in love, she’s got a lousy job which isn’t paying her enough, she has a roommate who loves her but seems to have it all, and she has a sweet personality and nature.

And we come to find out she’s the future mother of the leader of a rebellion which prevents the annihilation of the human race in the not-distant-enough future, when machines have arisen to eradicate mankind.

So, where does that fall on the list? Oh yeah…right along the bottom there. Survival. And not just her survival – the survival of humanity. (Whether we deserve to survive is another matter.)

“Okay, okay,” you say and roll your eyes, “I get it. Survival, basic need, yada yada. What the heck does this have to do with why sequels suck?”

Okay, keep your shirt on (unless you’re a hot chick, then go ‘head and take it off, no objections here). I’m getting there.

In T2, the audience gets another dose of the same thing. But…how? Shouldn’t we be yawning our way through this when we already saw the machines be defeated, and we know the child of Sarah Connor does become the leader of the resistance?

Well, here’s where the open ending of The Terminator plays in. At the end of the first movie, we have a very pregnant Sarah Connor wondering about the future, but feeling positive overall as she heads for Mexico to leave the grid and raise her son.

T2 picks up much later. John, Sarah’s son, is a young boy with problems and no mother to raise him, because she’s locked up. His foster parents aren’t helping much, and he’s basically Johnny the Troubled Teen. Okay, fair enough – raised by a lunatic who now resides in an asylum will do that to a kid, I’d suppose. But we also have the return of a familiar and frightening figure – the Terminator cyborg.

Two of ‘em, matter of fact.

So the future, which isn’t set (something the original movie rammed home as part of its theme), hasn’t been changed enough yet. The cyborg antagonists, bent on victory, have attacked in a few places in history to achieve their goal – killing John Connor and preventing him from leading the resistance in the future.

Because the original movie didn’t close the loop, this basic need still hasn’t been met. And because we have a new protagonist to root for and a new impact character – the formerly “evil” cyborg turned good and guardian – there’s a whole new level of tension. We have the exact same scenario presented with a new twist. Add in the superior writing and acting, the bits of humor and good tension and sympathy, and voila! A sequel which surpasses the original.

“Okay, tough guy, you think you’re so smart,” you sneer, “what about the incredible flops of Terminator 3: Rise of the Machines and Terminator: Salvation? Huh? What about those? Same basic need to meet, same characters to some degree, but both movies sucked rotten donkey–"

Okay, okay, stop, I get it. Let me address that.

…Next time. See ya then.

While I love taking credit for great achievements, I can’t take full credit for the information you’ll find here. Most of it comes from reading the works of David Baboulene, a great thinker of story theory and a clever guy. You can find him here.